Patrick Lacroix-Desmazes of the Department of Molecular and Macromolecular Chemistry, CNRS-UM-ENSCM has been named Distinguished Member of the Chemical Society of France for the year 2018.

The title of “Distinguished Member” is awarded to a researcher, an industrialist or a teacher, a member of the SCF aged 45 and over, who has demonstrated excellence in the field of chemistry and has contributed to its expansion. This prize also aims to recognize and honor chemists who are particularly involved in the chemistry community.

The nomination of Patrick Lacroix-Desmazes was made in May during an official ceremony where all of the new Distinguished Members of the Year were honored. 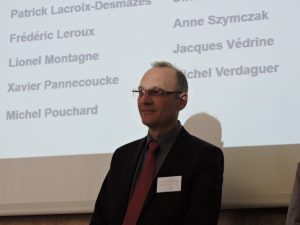